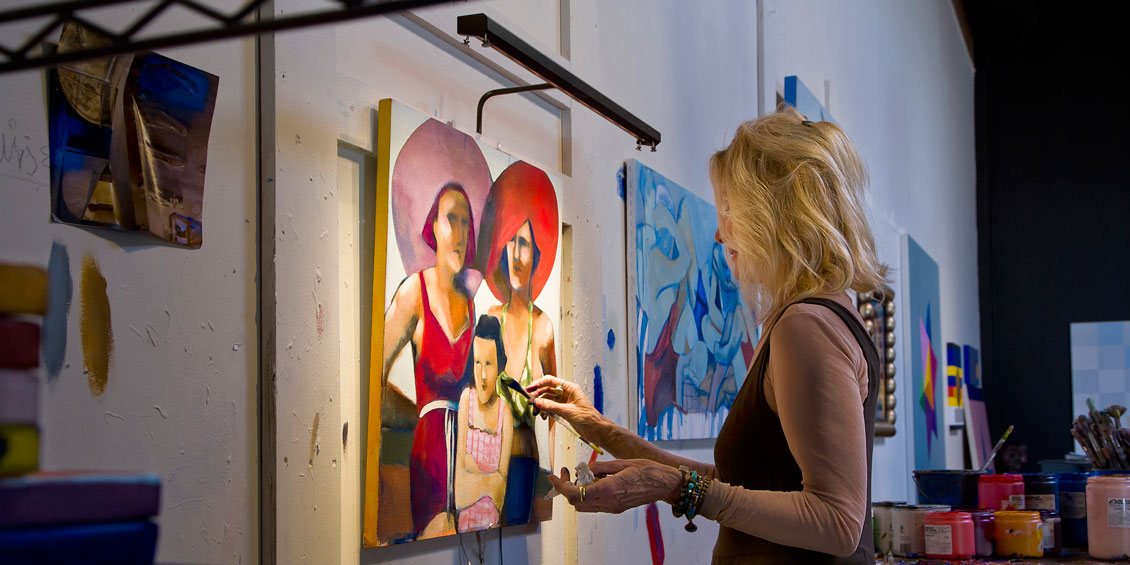 Impressed by the vibrancy the Revelite Art Light reveals on displayed artwork, artists requested an Easel Light with the same quality of illumination. Studios often suffer from insufficient natural light, causing colors to appear muted and untrue. Finding a natural and consistent light source while painting often becomes a race against time, with only a narrow window in which to work. The patented Revelite Easel Light (EL) eliminates the race, providing uniform illumination across the canvas with incredible color-rendering accuracy at any time of day, whether in the studio, demonstrating on stage or painting a nocturne in the great outdoors.

With the development of the Easel Light, artists are now Revelite’s biggest advocates, championing it’s use from easel to gallery to collection to truly represent their original vision.

The Easel Light is designed with the latest LED and optical technology to evenly illuminate an artist’s surface, from edge to edge to edge. Patented features allow adjustments to both the light level and direction based on the ambient conditions and the canvas height.

Two linear light modules are independently aimable to illuminate various canvas heights and a below easel color palette. Revelite casts light from a steep angle, allowing the artist to stand comfortably in front of the canvas without blocking the light source.

Because the quality of a light source significantly impacts the colors we see, Revelite EL incorporates LEDs with a high Coloring Rendering Index (CRI) and R9 Value to accurately reflect the artist’s color palette. The 3000K color temperature light source remains constant throughout the dimming curve and keeps whites natural and crisp, ideal for creating traditional works or modern pieces.

The Easel Light is available in three standard widths: 12”, 24” and 36”. The 12” transports well for artists who frequently paint away from the studio, such as plein air painters, event artists and workshop instructors. The 24” and 36” are ideal for a studio.

The Easel Light mounts to multiple styles of easels and pochade boxes, wood or metal, with a simple mounting bracket. An optional Strada Light Attachment is also available to pair Revelite with a Strada Easel.

The Revelite is virtually maintenance free, with a lifetime rating of over 50,000 hours.

"As an artist there is nothing that excites me more than intense and exotic color harmonies. While working on my painting I need the best lighting condition to be able to see each brush stroke and color shift. When I work in the studio I rely on Revelite to recreate natural light. Certain colors such as yellows and oranges have a tendency to "bend" or shift to a darker value if they are not painted under a proper lighting set-up. Revelite does the job perfectly."

"With the Revelite my work of art can be painted, displayed in the gallery and hang in the collector’s home all under one consistent light source."

"The Revelite has become an important tool in the creation of my works as well as the successful display of their final stage. Painting under it, I am able to better match the colors I had captured in my plein air study. It attached to my studio easel quite easily and has become an integral part of the studio. I can highly recommend the Revelite as an artist’s tool." 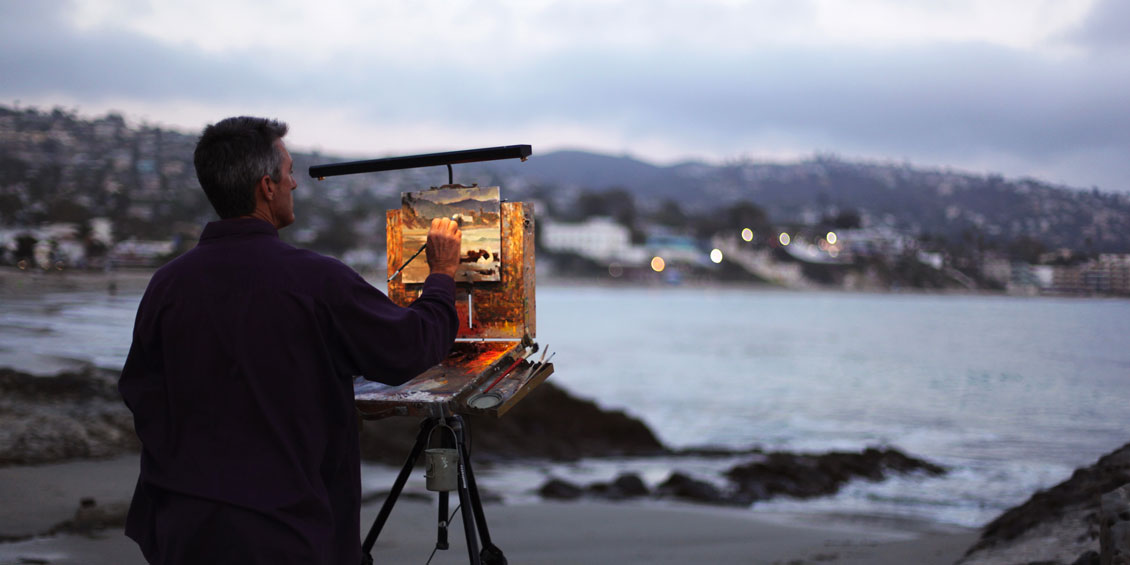 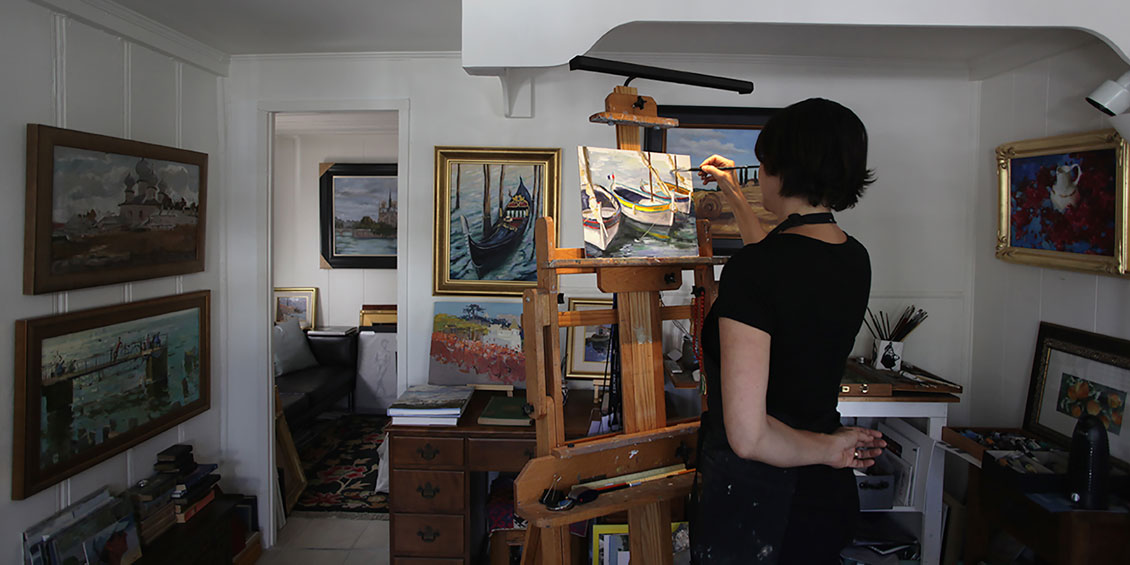 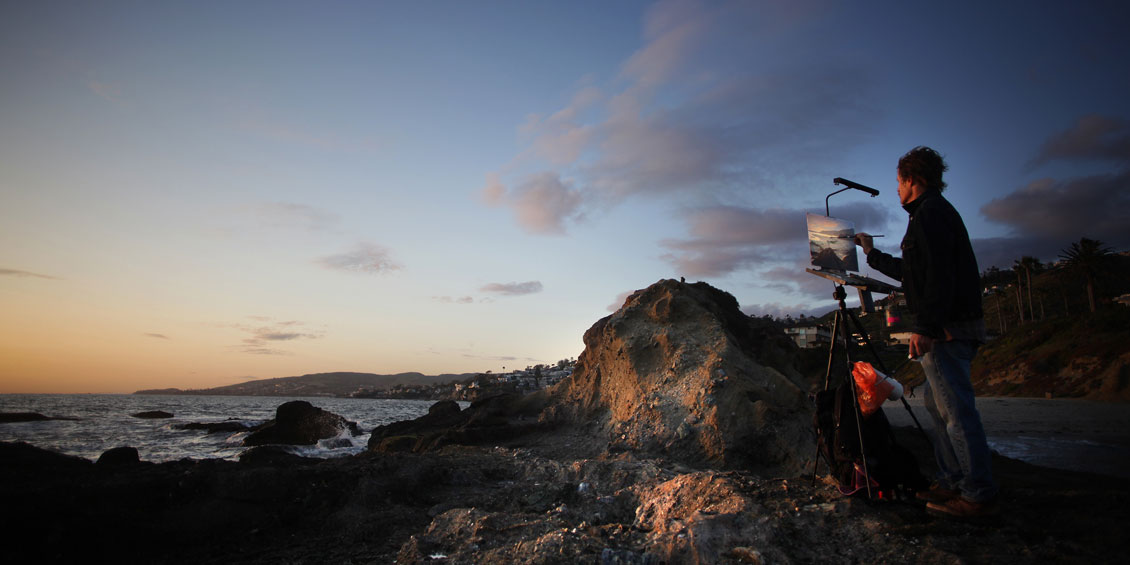 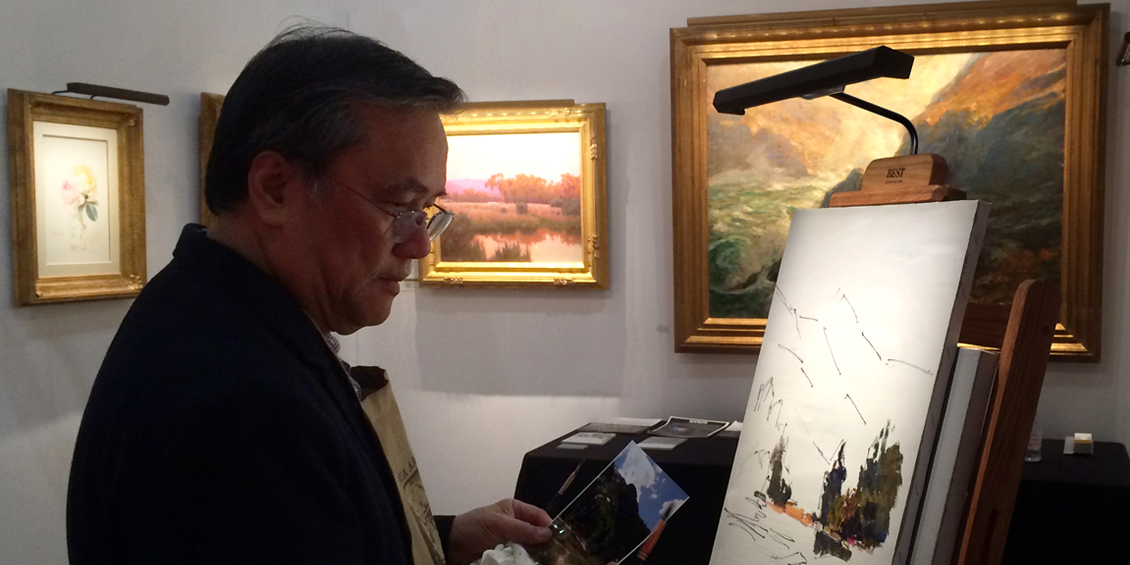 The Easel Light is available in three standard widths: 12”, 24” and 36”. The 12” transports well for artists who frequently paint away from the studio, such as plein air painters, event artists or workshop instructors. The 24” and 36” are ideal for studio work. Select an Easel Light that best matches your largest canvas width to achieve uniform illumination.

The Easel Light is powder-coat painted in a black finish. 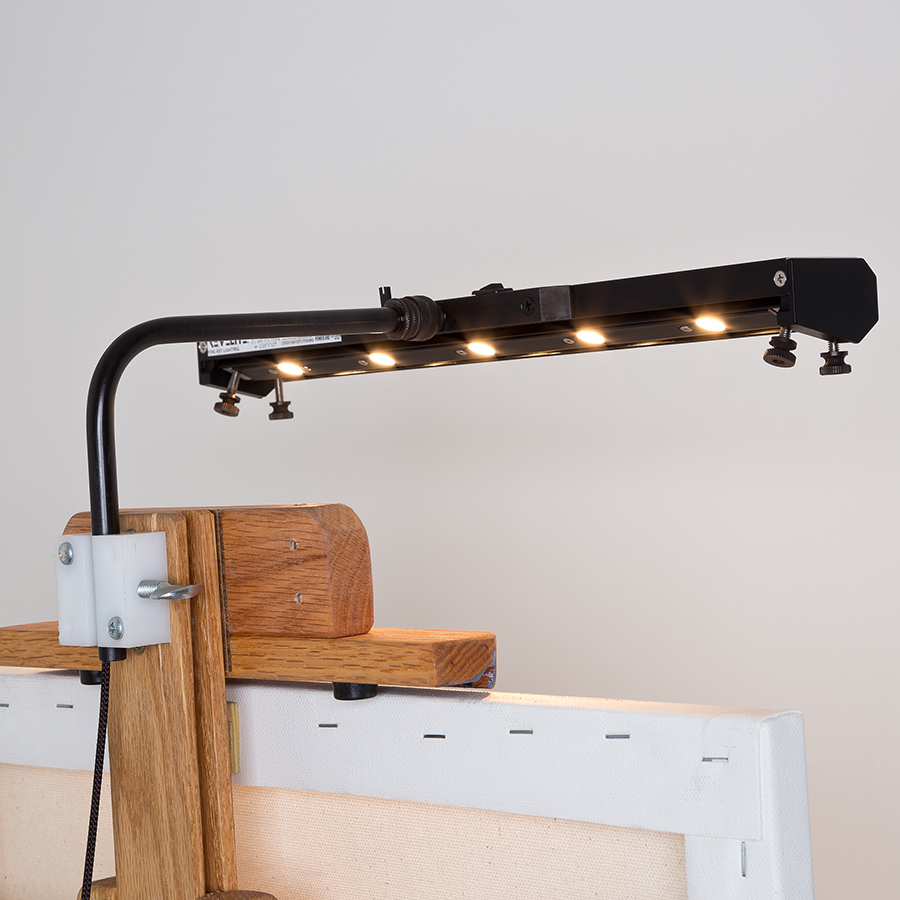 Revelite’s even lighting is fine-tuned to your canvas with both mechanical adjustments and light level calibration.

If you are painting a smaller sized piece and the color palette is located directly below the canvas, you can also direct the second row to the palette.

The light level of each light module is pre-calibrated at the factory. The row closest to the canvas is set to approximately 50% brightness and the second row to full brightness. This combination results in uniform lighting for a wide variety of canvas sizes and compositions. The light levels of the two modules may also be adjusted in the field with a small Phillips screwdriver.

An ON/OFF switch and dimming slider is mounted at the top of the light, allowing simple control of the Easel Light. 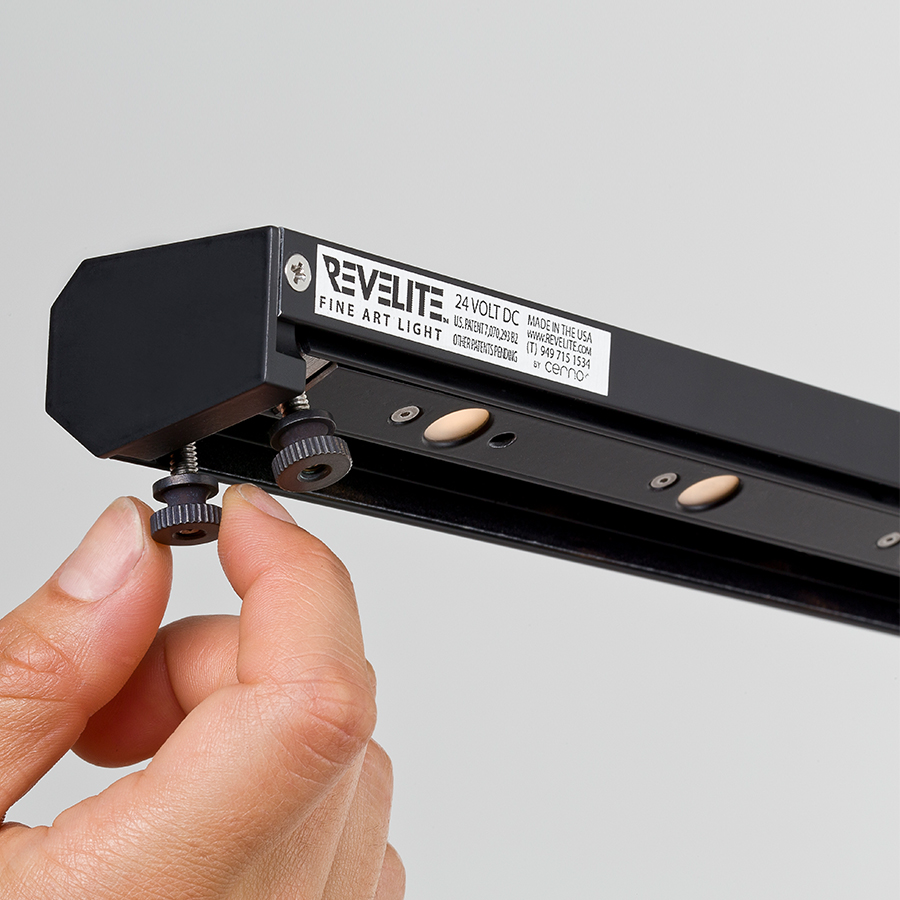 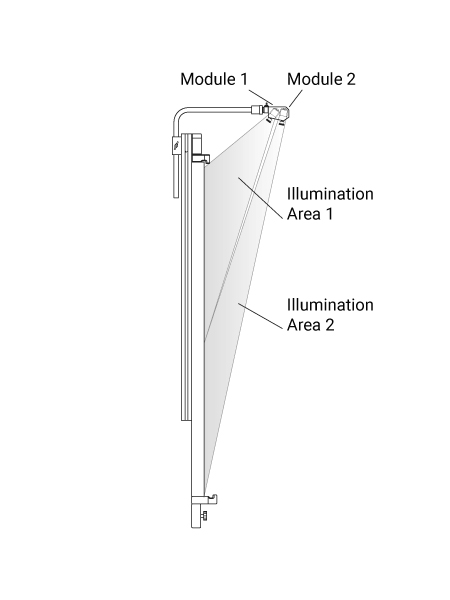 The Revelite Easel Light is available in a 3000K Color Correlated Temperature (CCT). This ideal CCT was selected based on testing different LED CCTs with multiple artwork styles and color schemes and was shown to keep whites natural and crisp. The Revelite LED source maintains its color temperature at any light level throughout the dimming curve.

Hue, value and intensity are all viewed as the artist intended with a 90+ Coloring Rendering Index (CRI) light source. The Spectral Power Distribution of the Revelite LEDs demonstrates a consistency and full range across the visible spectrum. With an R9 value of 83, reds read strong and vibrant. 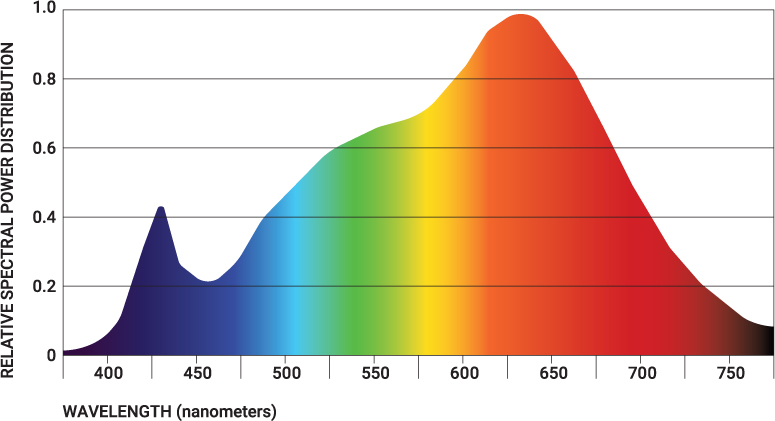 The actual delivered lumens will vary based on the adjusted settings of the Easel Light to the artwork.

The intensity of light and distribution will also vary based on the adjusted settings of the Easel Light to the canvas. The sample photometric distribution shown is based on an EL Revelite calibrated for a 24” tall canvas. The candela curve indicates a 20°x40° beam angle (nominal) with a maximum intensity of 325 candela at 10° vertical. 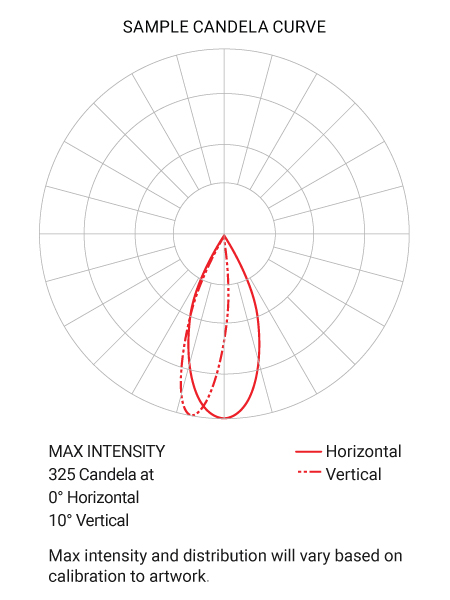 The Easel Light mounts to multiple types of easels and pochade boxes. The Strada Light Attachment is an optional mounting bracket for artists who use the Strada Easel.

The standard easel mounting bracket will secure to wood or metal surfaces. Flat head wood screws are provided to fasten the bracket to a thick wood surface. Pan head screws and washers are provided for thin wood surfaces and are used to sandwich the wood panel between the washers and the mounting bracket. VHB double sided tape is also supplied to adhere the bracket to a clean metal surface (recommended for a 12” Easel Light only). Once the bracket is secure, simply slide the mounting arm through the center of the bracket. 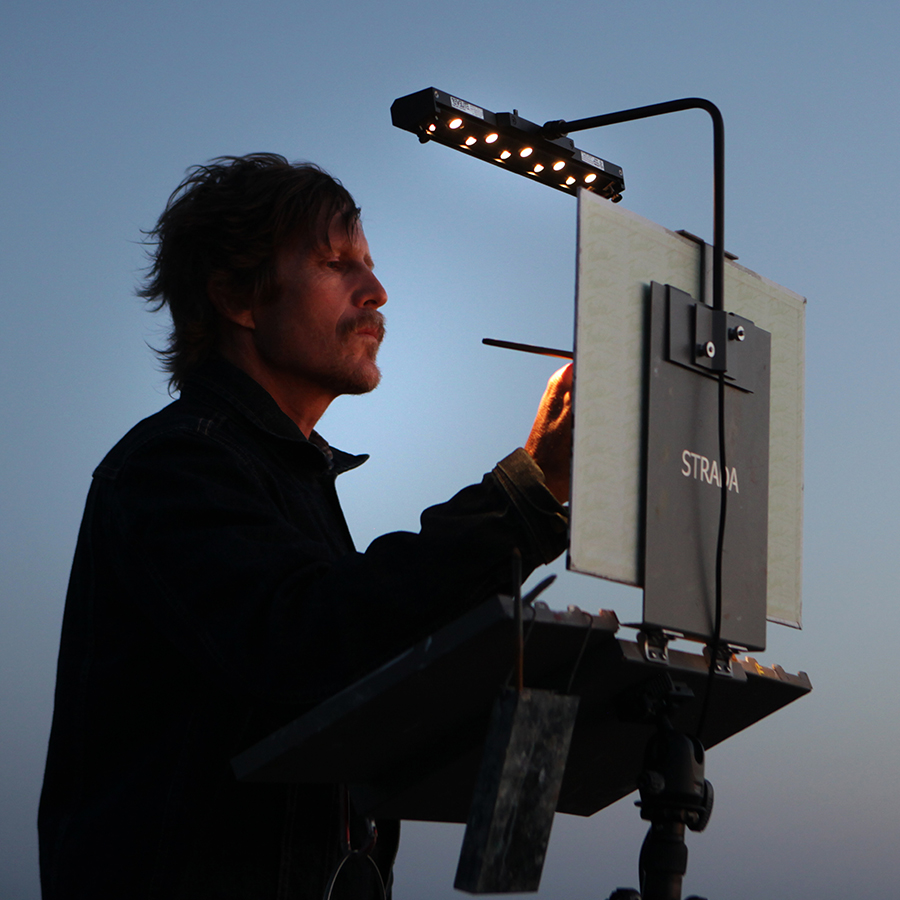 The actual power will vary based on the adjusted settings of the Easel Light to the artwork.

The rechargeable battery option is an ideal accessory for plein air painters, event painters, or workshop instructors who are uncertain about access to power. 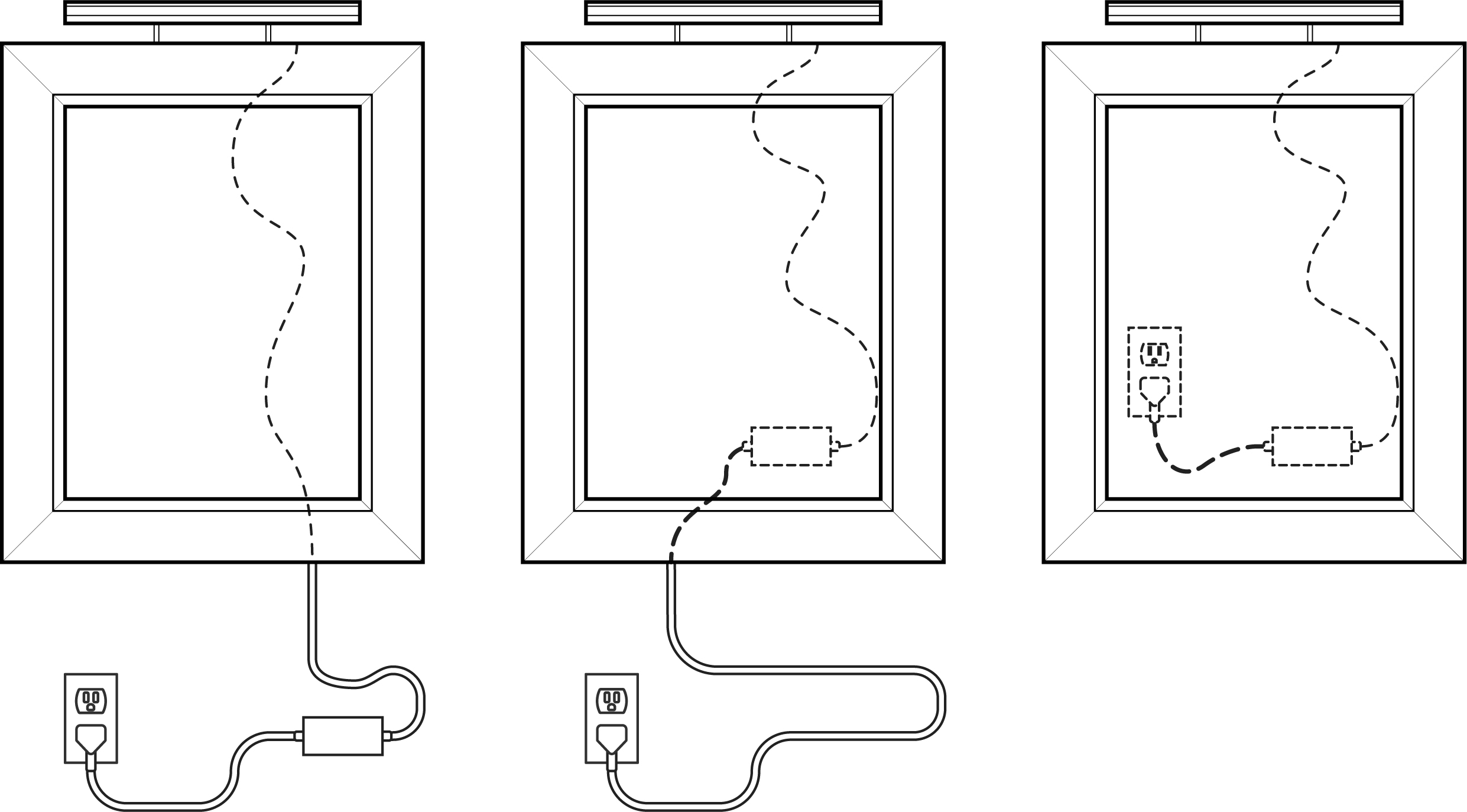 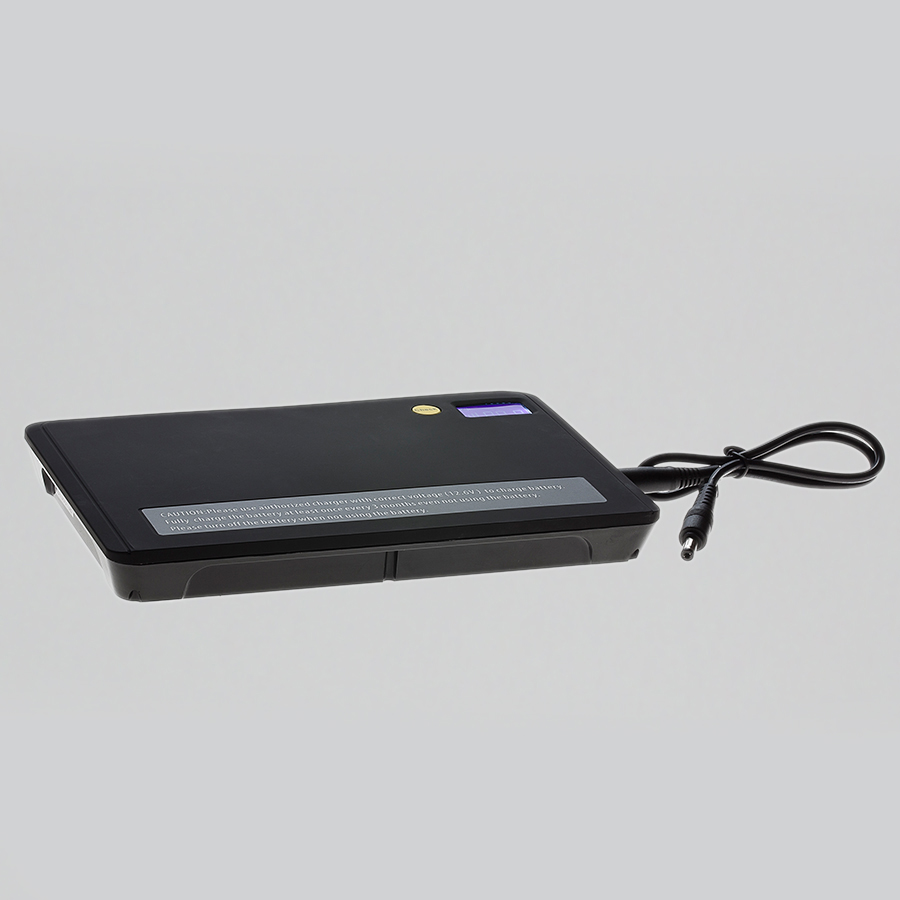 An ON/OFF switch and dimming slider is mounted at the top of the light, allowing simple control of the Easel Light. The dimming range is from 100 to 10%, with both light modules controlled together to maintain their relative brightness ratio. 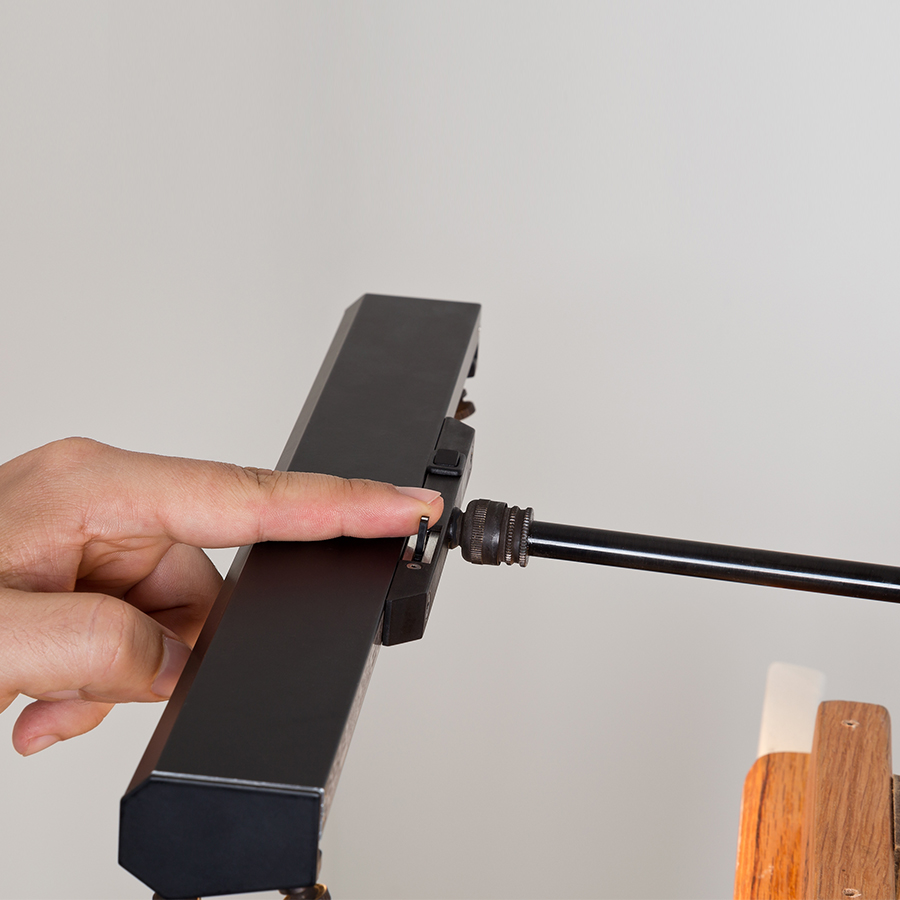